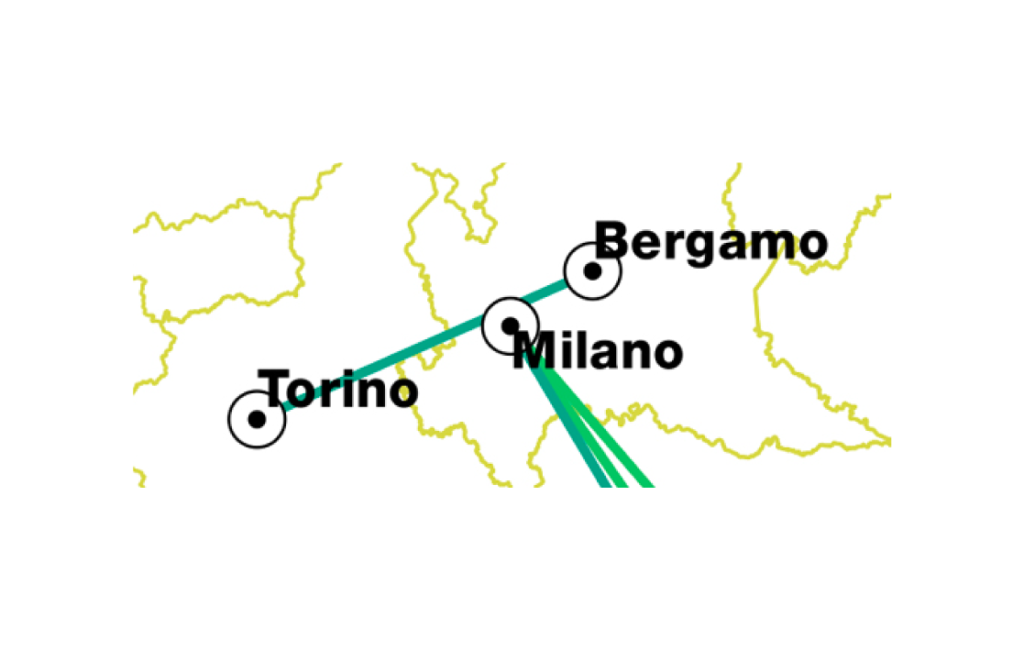 In this tab we show the main relationships between regions in the bus market in 2019 and the prices per km for the main twenty routes.
In terms of the macro areas, the top 10 relationships (excluding the ones involving airports) show 3 North to South relations, 3 Centre to South relations and 2 internally relations in the South. These last relationships are due to the fact that there is no direct train connection between Naples-Bari (Campania-Puglia) and from Puglia to Sicily.
An interesting fact is the substantial involvement of Sicily in connections toward all Italy. The most searched routes are in fact between Sicily and Lazio, constituting about 5% of the national total of searched travels, mainly between Rome and Palermo or Catania. Another interesting observation among the top routes are Milan-Catania and Palermo-Bologna which come under the category of distances more than 1000 km, further validating the increase in searches for very long distances over the years.
Lazio-Calabria and Lombardy-Calabria contribute 4% each to the total number of searched routes. Connections between Puglia and north Italy conversely lost the importance they used to have in the past years.

The highest average price per km is the Center-South relation Roccaraso-Napoli (112km) with more than 0,1€ per km. Apart from its short distance, this could be due to Roccaraso being a skiing destination with price hikes during winter season.
The consistent low prices between Napoli-Bari over the years despite the absence of a direct rail connection should be explained by the existence of various coach operators on the same route. An interesting observation is the similar price per km for very long-distance North-South relation Milano-Catania (1300km) and short distance North-North relation Torino-Bergamo (180km), both of them not having an effective rail alternative (and flights to Catania rose considerably). Roma-Napoli and Napoli-Milano have less than the average price per km compared to their respective macro relations. This stems probably from the existing competition both between bus companies and with the HS rail leading to lower prices. The competition between HS rail and bus cannot be taken for granted because of the difference in travel experience and prices: this puts into perspective that the demand is not completely satisfied by the rail network along the North-Center-South corridor. Furthermore, yield management techniques applied by NTV and Trenitalia have induced coach companies to keep prices low to retain their customer base. Among the top 10 airport routes, the ones with the lowest price per km are Bergamo-Venice and Bari-Matera. Apart from the above mentioned, the northern relations (the routes connecting Malpensa and Orio al Serio-Bergamo airports) are costlier relative to the Center and South relations. The most expensive airport route being the shortest one between Malpensa-Chivasso.